The International Forum on Heart Failure and Stem Cell Therapies Focus on C-Cure Technology and Launch Ceremony of Phase III Multisite Clinical Trial in China was held jointly by six organizations including Experts Committee of China Council for Medicine International Promotion, National Stem Cell and Regenerative Medicine Industrial Technology Innovation Strategic Alliance, etc on August 25th in Shanghai. The reporter was informed from the forum that the C-Cure technology for the treatment of heart failure through stem cells will make the heart failure patients who are lack of effective treatment regain health and rebirth. 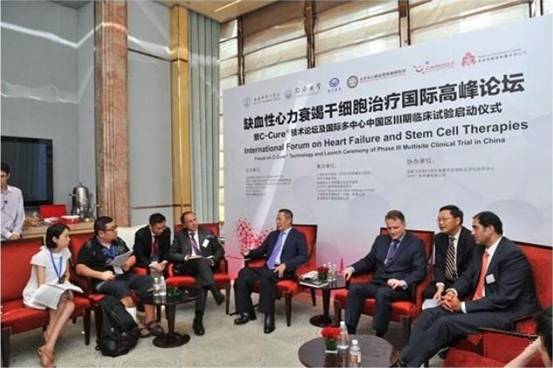 Junbo Ge, Academician from the Chinese Academy of Sciences and Deputy President of Tongji University, has introduced the current situation of heart failure worldwide on the forum, that is, the number of patients worldwide reaches 117 million, among which there are 29.971 million patients in China, accounting for 25.6% of the total. At present, the traditional therapy of end-stage heart failure requires heart transplantation, which not only arouses problems such as too less donors, long waiting time, strong rejection reaction, etc, but also brings huge economic burden to the family or even the society. Academician Ge also says that the scientists are still making unremitting efforts to promote the application of stem cell technology on Chinese people suitably and safely. He also hopes that more administrative departments will support this technology and he believes the future will definitely be the biomedical era. 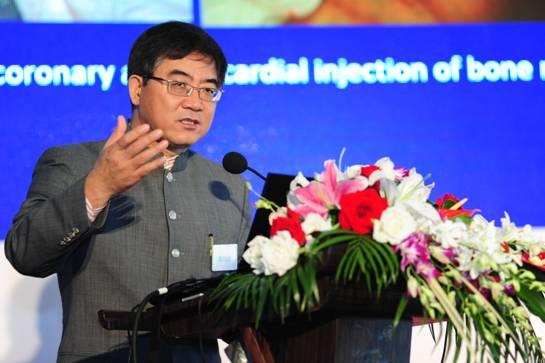 Dr Andre Terzic from the Center for Regenerative Medicine of the US Mayo Clinic and the experts from the Cardiovascular Center of Belgian Aalst Hospital have introduced the cardiac repair revolution of stem cell technology——C-cure technology and C-CathEZ Catheter on the forum. The C-Cure technology involves aspiration of the patient’s bone marrow and isolation of the mesenchymal stem cell fraction. A unique and proprietary “cardiopoietic cocktail” of proteins is used to differentiate the patient’s mesenchymal stem cells into cardiac progenitor cells, or so called “cardiopoietic cells”. The heart specific stem cells are expanded in vitro and then implanted into the diseased and damaged area of the heart using the C-Cathez delivery device. These implanted cardiac stem cells regenerate and heal the heart that has been injured by myocardial infarction, or heart attack.

C-CathEZ is the world’s most advanced proprietary catheter used for delivery of stem cells to the heart. It is capable of accurately delivering diagnostic and therapeutic agents to the damaged myocardium through a minimally invasive procedure. C-CathEZ navigates to the left ventricle through the aortic arch, and its curved and porous needle stays anchored to the ventricular wall, moving in sync with the ventricular wall motion once it reached the myocardium. The porous needle can also be repositioned for injections of cells into different areas. C-CathEZ enables the injection and distribution of stem cells evenly into the damaged myocardium, resulting in a higher portion of retention of cells. The C-Cure technology and the catheter C-CathEZ have been nominated as finalists for two 2014 European Mediscience Awards, the “Breakthrough Award” and the “Best Technology Award”.

Medisun has established collaborations with the Mayo Clinic, a renowned medical group in the United States, and the two have co-invested in Cardio3 BioSciences, the owner of C-Cure technology and catheter C-CathEZ. At present, C-Cure has been authorized to conduct the Phase III clinical trial in the US and European Union, and the product could potentially be launched globally in 2016. Moreover, the technology of catheter C-CathEZ has obtained authentication and licensing from the EU in April, 2012.

Zhongmin Liu, President of the East Hospital of Tongji University says, “The clinical application of stem cell is the dream of a number of clinical doctors and the experts from the stem cell field. With the gradual improvement of the isolation, culture and expansion technology of stem cells as well as the interventional methods for heart failure patients, the clinical application is promising. The East Hospital is looking for a biological cell therapy with more effectiveness and better life quality for the patients, which is able to avoid and delay the heart transplantation, that is, the application of stem cells in the heart failure treatment. Before the stem cell therapy, the heart failure patients rely on the heart transplantation ultimately. However, the time to wait for the heart donor is long, and the patient has to be hospitalized repeatedly, which costs money and makes the patient painful. With this cell technology, combining with technology of minimally invasive catheter, the result of HF treatment may be identified whenever or wherever without spending too much money. It can avoid the patients to be hospitalized repeatedly and can also reduce expenditure, which brings better life for the patients. This cell therapy brings effects that the traditional drug treatment can’t give not only for HF patients, but also for patients with diabetes, stroke, osteoarthritis, etc in the future. Therefore, the cell treatment including stem cell treatment will be the pillar industry which will be focused on to develop not only in China, but also in developed countries such as the United States, and it will certainly lead the new revolution in medical industry.

In addition, the Stem Cell Clinical Trial Management Approach will be issued in the second half of this year. We can believe that the support of relevant departments in China will certainly promote the regenerative medicine of stem cell to develop rapidly and normatively for the benefit of Chinese people.

Mayo Clinic: Headquartered in Rochester, Minnesota, USA, Mayo Clinic marks 150 years of service to patients in 2014. As a medical group with integrated treatment and care, medical school instruction and scientific research, Mayo is highly regarded by the international medical community and has been at or near the top of the U.S News & World Report list of “Best Hospitals” for more than 20 years. For more than a century, Mayo Clinic has been a leader in the research and development of new therapies, innovation in hospital maganement and next generation telemedicine, and it is sometimes referred as the “Supreme Court” of medicine. Today, Mayo Clinic has branches in Florida and Arizona, its own medical school and dozens of clinics in the surrounding states. It employs more than 3,800 physicians and scientists ans 50,900 allied health staff, with an annual revenue of nearly US$ 10 billion.

Affiliated companies established by Medisun in Asia and China

Cardio3 BioSciences Aisa Holdings Limited will be sponsoring the Phase III clinical development and commercialization of C-Cure for ischemic heart failure and other stem cell-based regenerative products. The company plans to enter the Japanese market with an expected launch of a clinical trial in 2015, followed by introduction into markets including India, Indonesia, etc. where the population is over 20 million.

Cardio3 BioSciences (China) Co., Ltd will be sponsoring the Phase III clinical development and commercialization of C-Cure in China.